The evolution of Rule 40 of the Olympic Charter (which controls how Olympians can be used in advertising during the Games) has been rapid over the last year. It’s been quite a saga. We’ve reported on these developments in several blogs so, in case you missed them and want the background, we’ve linked to them where relevant below.

The approach to be taken to Rule 40 in the UK has been much-anticipated. However, the Rule 40 Guidelines recently released by the British Olympic Association (“BOA”) have provoked a negative reaction from Team GB athletes who were expecting more.

Athlete disquiet over Rule 40 started back in 2012 and has been building around the world since. A major turning point came in February of this year, when the German competition law authority found Rule 40 to be an abuse of a dominant position and thereby anti-competitive (see here). As a result, the Germans have effectively abolished Rule 40 for their Olympians, ensuring that athletes’ personal sponsors don’t infringe the law (for example by using Olympic intellectual property), but otherwise allowing a pretty free-rein during the Games period.

Following the German ruling, the International Olympic Committee (“IOC”) re-wrote Rule 40 to make it more permissive than prohibitive (see here). While this was more cosmetic than substantial, the IOC subsequently issued a ‘Key Principles’ document which effectively provided a framework for Rule 40. It proposed several concessions compared to the regime for previous Games, but still gave National Olympic Committees (“NOCs”) significant freedom to determine how to apply the rule in their territory.

The Rule 40 Guidelines issued by the BOA (the UK’s NOC), in the main follow the IOC’s Key Principles. (The full guidelines can be found here.) In summary, brands can run ads in the UK during the Games period (14 July 2020 – 11 August 2020) which feature a Team GB Olympian they sponsor, provided the ad:

While the timelines are a little more generous than for previous Games, the principles are effectively the same as were in place for Rio 2016.

One new benefit is that Team GB athletes competing in Tokyo may now issue one thank you message to each of their sponsors across their social media platforms on one occasion during the Games. However, the messages cannot be linked to their performance at the Games or actively promote the sponsor's products. Nevertheless, this provides a new opportunity for athletes to express their gratitude to their sponsors at a time when they are likely to be getting the most traffic on their social channels. Personal sponsors of Team GB athletes will, however, still need to wait until after the Games Period to issue any generic congratulatory messages. This is consistent with the IOC’s Key Principles.

One additional concession from the BOA is that it recognises that “small, local businesses will want to show their support for local athletes with messages during the Games”, and the Guidelines indicate that the BOA may well approve marketing which doesn’t present a “commercial conflict”. So if you’re an independent restaurant, electrician, or carpet store who supports an athlete and you want to shout about this locally, you may well be permitted to do so.

The BOA clearly recognises that it has not gone as far to relax Rule 40 as other NOCs have. For example, aside from the Germans who have taken a very relaxed approach, others (such as the USA) have dropped the requirement for approval, just requiring ads to be submitted for the record. Some NOCs have been more generous over social media thank you messages. For example, Australia allows one thank you message per performance, per sponsor, and the USA permits personal sponsors to issue one (fairly bland) congratulatory or supportive message on their social media platforms during the Games.

The BOA explain that, as "one of the few NOCs which do not rely on government funding" they need to give greater protection to their sponsors who are principally buying an exclusive association with Team GB. (As the Games have a clean venues policy, sponsoring brands get no branding on kit or field of play.) To maximise the value, Team GB sponsors who support individual athletes are allowed to feature those athletes in their ads and send congratulatory messages etc, without worrying about being in breach of Rule 40.

While the BOA’s need for funding is no doubt real, this clearly isn't justification enough for the British athletes (led by Adam Gemili) now threatening legal action. However, unless any legal action can be settled or concluded prior to the Games, athletes and their sponsors remain, at best, in an uncertain position.

“For most athletes the Olympics is that one chance every four years to be in the limelight – and we want to be able to recognise those sponsors that have helped us make it to the Games." Adam Gemili. 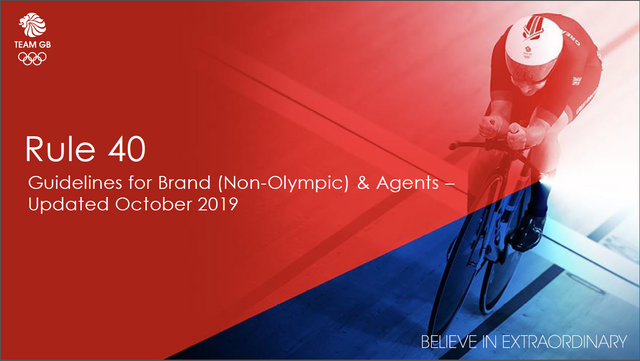 EXCLUSIVE:
“We just want a fair opportunity”. Sprinter @Adam_Gemili tells us why he’s among a group of top British athletes (including Mo Farah) threatening to sue the British Olympic Association @TeamGB over ‘Rule40’ sponsorship regulations. pic.twitter.com/oXkjX9nfU2

Love Island, Football and Just Cause - how one man nearly blew it all in the pursuit of love...
Benjamin Smith
repost  cancel